For all that is great and good in Marylebone, coffee is surely a weak point. At one extremity, there is Workshop Coffee’s Wigmore Street outlet, and now at another, there is The Borough Barista.
Neither are particularly handy to the main drag, where the prospect of now two Nordic Bakery locations are about the best it gets.

Or the Chiltern Rooms, which is never open. Providores if you're eating, granted, Rumours of Monocle Café are still just that, although the old restaurant opposite Midori House has had a lot of builders in. 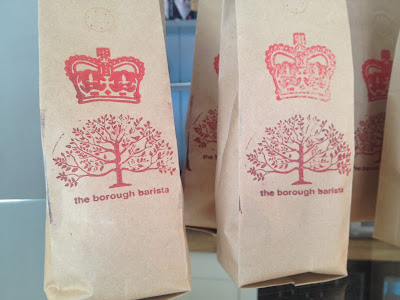 So a good place anchoring ‘Seymour Village’ is bound to be a winner surely? Well the initial signs are good – strong design, a newspaper sellers’ chalkboard with coffee proclamations, clean, fresh interior and a lovely outdoor seating area. So far so good.
The service is friendly too. But the coffee just wasn’t up to much. I ordered a Long Black, which any place worth its salt in 2012 knows is different to an Americano. Shorter, stronger, no danger of milk. What was automatically made was a large sized Americano (sold at the higher price – without asking) which was subsequently too weak. 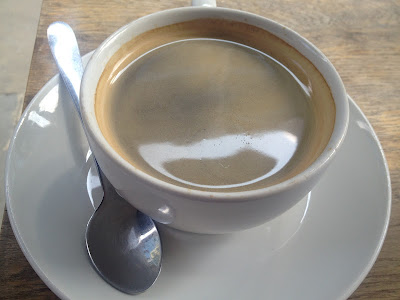 The beans were their own, and weren't particularly flavourful at any end of the spectrum, due to the poor execution. Dull ceramics too I thought, which is an easy win usually.
The selection of goodies to eat was tempting, but at about £4 for a cheese and tomato croissant, I gave it a swerve. Much of the money round here won’t even look at the prices, so marks for opportunism I suppose. 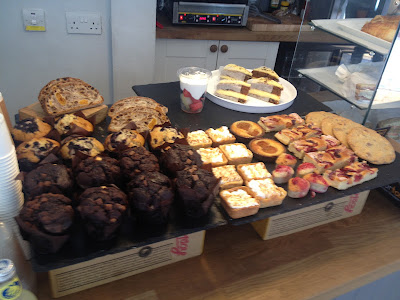 A shame really, and while I would not write it off on one bad coffee, that one experience was poor. Seymour Place is a quintessential inner London street, with a burgeoning foodie scene comprising of Donostia, Sandy’s Corsican Pizza, Vinoteca and a couple of decent pubs.

If this enclave continues to flourish (Marylebone has the most discerning landlords in the country) then this place will become quite prominent. I hope then that the quality will then match the potential.

Posted by The Perfect Trough at 11:58 No comments:

A recent jaunt back to Manchester had me scratching my head a little, not to mention nursing it too. In typically Manc fashion, the Northern Quarter has been bursting with bars for a couple of years, and only now is the food starting to catch up. Brunch and breakfast aren’t socialising meals up there yet, and the best coffee places in town do still sport Illy signs, but it is improving.
With sucj great boozing, the food trend closest to it was always the most likely to burgeon in the NQ. I’m talking tarted up junk food of course, which you can’t swing a cat for in London. My two spots here are SoLiTa and Almost Famous.
SoLiTa is the more grown up of the two. It proudly sports an Inka Grill and the food ranges from the inventive (pulled pork sundaes?) to a range of burgers and steaks under the grill. My burger was the Catalan – at £11ish with manchego, red peppers and chorizo adorning a thick, medium-cooked patty. We weren’t asked how we wanted them cooked. Service was good though, and the draft beer excellent. They have a handsome, buffed-up waiter too. 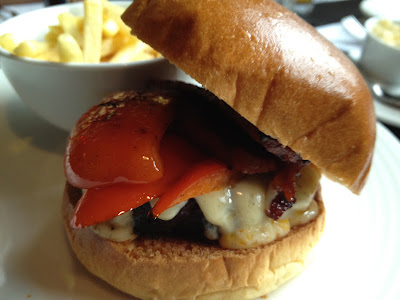 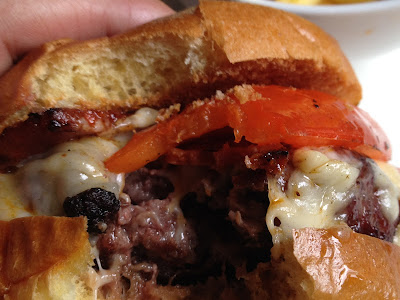 They take reservations which is astonishing as their counterparts in London (Spuntino perhaps?) would not. Then again, Northern tea times would have a rush on at about 5pm and a sea of free tables at about 9pm, so this cultural quirk would make no-revs ironically quite handy for visiting Londoners.
Almost Famous is an irreverent scamp of a place. It’s up some dodgy stairs next to Keko Moku and at the very top, a few rooms have been given over to their own brand of iniquity. One has sofas and is for chilling out, one has tables for eating and one is the bar area, with an impressive brick display of bottles above the bar.
No photography allowed, but I managed two of the food. This place’s menu was familiar, as was the rock ‘n roll sweariness about the place. It has chicken wings, it has chilli fries, gobby inked-up waitresses, the cocktails are in jam jars and it even has a souped up Big Mac-type flagship burger with special sauce. But it’s a brilliant place to while an hour or two away, original or not.
Special mention to the Bacon Bacon Fries – which are great chips, dripping in Velveeta and bacon bits. Salty, delicious, amazing, £4. Get them if you ever come. Burgers about £7. 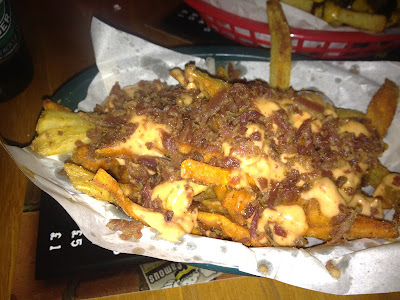 As the vast majority of clientele wouldn’t have been to MEATliquor, I doubt it matters as this would be original to them. So many of the London junk food trends are spirited away from New York anyway (meatballs, sliders, wings, dogs) that it begs the question – does being the importing trailblazer on this island give you the credibility for the concept?
I don’t think so, and good luck to anybody bringing foodie diversity to a city which is second to none for boozing, but punching well below its weight on the food side. Now, if only somebody could emulate a decent Antipodean/London coffee joint in Manc…

Posted by The Perfect Trough at 13:19 No comments:

An impending office move means less time in Clerkenwell and more in Soho. Not necessarily a bad thing, but as my legion of readers will know, I spend enough time there anyway. When I say Clerkenwell, I'm including quite big swathes of EC1 with numerous clusters of food, booze and coffee interest: Smithfield, Leather Lane, St John's Square, the Italian strip, Exmouth Market, Whitecross Street... it's a great area with a lot of choice.

But onwards I go, and before that, a brief serenade to my favourite coffee place in the area. Not Workshop (always St Ali to me), or Prufrock, or Caravan - but the humble Dose Espresso.

Dose is a tiny, low key place on Long Lane towards Barbican. It's a typical Melburnian hole-in-the-wall sort of place, with a few chairs but mainly take away. The cute red cups match the huge, vintage La Marzocco but you wouldn't linger for too long. 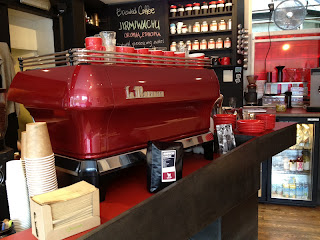 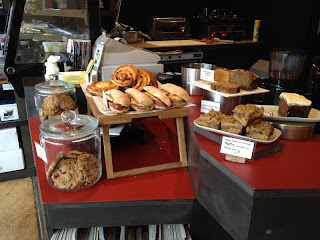 Coffee is fantastic; Square Mile but some of the lesser seen single origins and blends. They do some snacks and sarnies too but the focus is firmly on the coffee here. For the peckish, I'd go next door to The Old Red Cow for one of the best bar food and craft ale selections for miles. 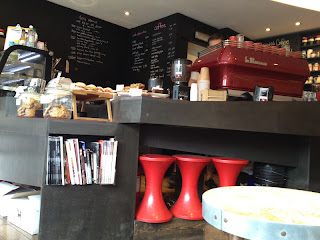 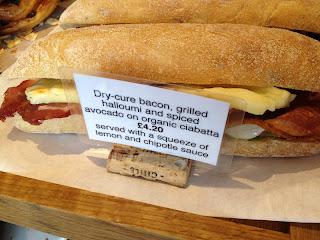 Soho is obviously littered with great coffee places, so I'm not worried on that front. But Dose has a certain calm and serenity not easily found in W1, and I'll miss it. Their range of Hario gear is excellent too.

In theory, a steakhouse (or steak joint I suppose is closer) in the City fills me with dread. Sweaty blokes with napkins down their shirts, sleeves rolled up, entitlement coursing around the room, dropping 2-large on Chateau Something on bonus day…stupid stereotypes of course, but a far cry from W1 indeed. But needs must and finding myself on a Friday evening near St Paul's and hankering for steak, I was suddenly spoilt for choice.
I’m not a huge fan of late dining in malls (in this continent anyway) so Barbecoa was out. And Goodman I thought might be a touch staid in their City location, so it was over to the devil I know, at Hawksmoor Guildhall.
The space is pretty much identical to Seven Dials. A grand sweep downstairs, a sultry moody bar and through to a large dining room with low lighting and wood panelling. The room feels more spacious, and more symmetrical in a way. The industrial aspects of Seven Dials’ brewery heritage are absent here. But it’s ostensibly the same.
The food is the same too. We had 900g of Porterhouse which came to £76. It was perfectly cooked and wonderfully smoky, and we happily coped without sauces, but there just wasn’t quite enough of it. For £76, I shouldn’t be peckish. At all. You really are paying a lot for a massive bone, as it were…
Wines, cocktails and sides are all fantastic here and have been extensively covered, including by me previously. Service was keen and clued up. And the crowd on a Friday night wasn’t too dissimilar to any other location of theirs – yes some suits, but a real mix with plenty of women and people in civvies. During the week I’m sure it’s different, but I can’t complain really as this is their turf. I just hate feeling underdressed.
In short, this is more of the same, but no worse for it. However I’d stick to the £30 bone-in sirloin which at 600g represents much better value that the shared cuts – where you need to hit a kilo (and spend a ton) to debilitate yourself suitably.
Food – 9/10
Drink – 9/10
Service - 8/10
Value – 7/10
Tap water tales – 9/10
Staff Hotness – 8/10

Posted by The Perfect Trough at 12:38 No comments:

Ginger & White have opened their third outlet in a little alleyway in Soho. It’s in a familiar position to the  original alleyway spot in Hampstead, come to think of it, but does feel a little more relaxed, and with markedly less buggies. 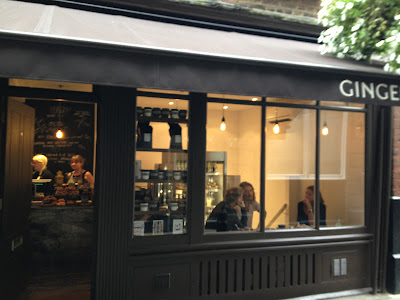 These guys have been a saviour in Hampstead for quite a while now. For such an affluent, pleasant area, it’s always been quite devoid of interesting eating and drinking options, and certainly coffee. Yes, every chain is there, and yes there are a few independent fusty old timer restos lurking, but Hampstead’s offerings are generally not as good as they should be.
Enter Ginger & White, about three years ago, their twist on the Antipodean-inspired coffee revolution being that whilst the coffee ethos was firmly in the Down Under mould, the rest of the business was British and proud. Cue lots of Union Flags, scones, teas, sausage rolls and so forth. Coffee credit where it’s due, but our baked goods are far superior to Australia’s and New Zealand’s, and yes I’m including pies. 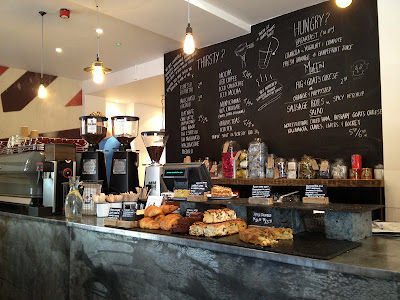 But Soho is quite a different beast, and not a small pond. There is decent coffee in every direction. Within a two minute walk from this location, there is Fernandez and Wells (x2), Café Gourmand, Speakeasy, Foxcroft & Ginger, Flat White, Sacred, Fairgrounds, Joe & The Juice, vida e caffé and countless others just a tad further afield. Not to mention that weird, intimidating bookshop/café diagonal from here full of yappy luvvies and their yappy dogs.
So it’s a tough market where only quality and something different pass muster, – but it’s a big market too. On the whole, I think Ginger & White should be a success here. 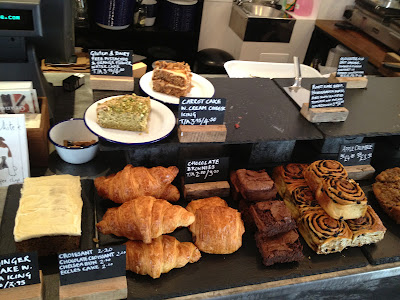 It’s cosy in a way that Fernandez & Wells’ starkness doesn’t provide, so I can foresee people lingering over cake. It's not sceney like Flat White, and the staff are very welcoming. The food offering is excellent and varied – many of the better coffee shops offer fancy £6 sandwiches with fancy ingredients, but Ginger & White’s bacon and cheese scone is a true destination piece of grub.
And crucially, its long black is perfectly executed – short, strong and with a consistency bordering on treacle, with Square Mile beans: 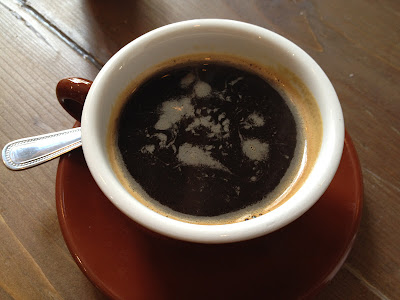 Posted by The Perfect Trough at 11:02 No comments:

Where I'm Pigging Out